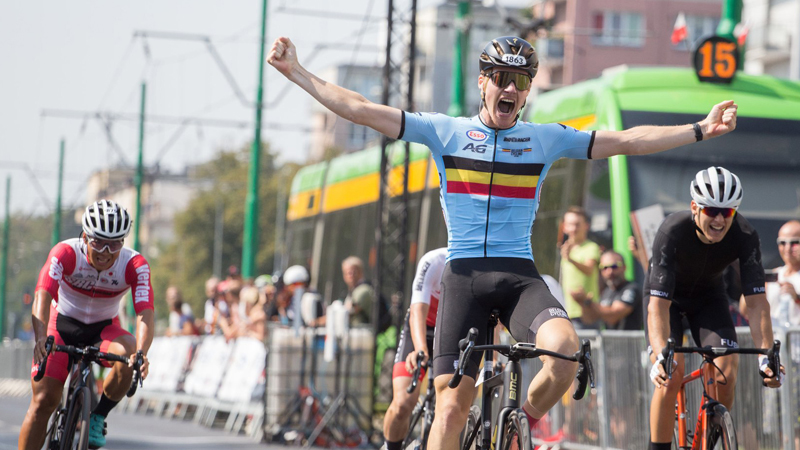 It doesn't always have to be negative news that we post in these Corona-times. Reigning world champion Maxim Pirard who won his world title in the men 19-34 age group last year in a 8-men break sprint at the end of the 2019 UCI Gran Fondo World Championships in Poznan wanted to do something special this past weekend to honour the Tour of Flanders who couldn't take place on their scheduled date this Sunday and to cope with a period without racing.

The 22 year old Belgian started his journey on Saturday night 3.00am in his hometown Sint-Denijs-Boekel which is only 10km away from the finish of the Tour of Flanders for his own Tour of Flanders 2.0, riding the contours of the Flemish region (https://www.strava.com/activities/3260654741), a trip of 1001 km.

Maxim, how did you decide to start a 1000km training ride?

Last year, I did a training ride of 1100km towards Albi in France where the 2017 UCI Gran Fondo World Championships took place. As a world champion granfondo, I'm used to train very long. The only difference to a normal training was my bag that I had attached to my steer to bring my food, drinks, isotonic powder, spare tires, tools and a power bank for all my devices.

Did everything go according to plan?

Yes and no. I had a first crash after exactly 100km along the coastline, but without too much damage. That's the only incident in these 34 hours on the bike. I didn't have a flat tyre so returned with the 5 spare ones I had brought with me. I had some company of a photographer in the first hours and then also a buddy who joined the ride after 400km as that's usually the point where I get my first dip.

How about the night from Saturday to Sunday?

With the lockdown light in Belgium, there was quite some police control on the roads and a police vehicle passed me twice before they stopped me at 2.30am in the middle of the night. They asked me what I was doing on my bike at that time and I explained them my plans. As it was very cold, they offered me some soup in their office and I could also take a shower. I also took a quick nap which wasn't planned, but given the circumstances, it did me good. The hardest moment of such a trip is always sunrise which was around 7am on Sunday morning and gave me a mental dip, but some chewing gum with caffeine helped me through.

No physical dip in these two days?

No, I was only getting better and better after 700km. It's only a matter of drinking and eating enough. I had hoped for some back wind in the last 10 hours, but the wind went down on Sunday afternoon and I have to ride fast to finish before midnight. I just made it home at 11.42pm late on Sunday. After a quick shower, my bed felt so good. Time to dream about the next challenge...