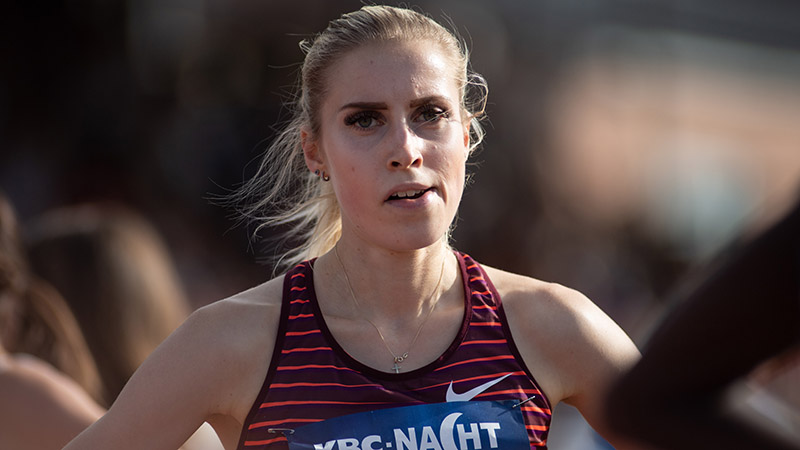 The KBC Nacht would not be possible without Belgian top athletes at the start and edition 43 was no different. The Belgian stars who set the De Veen Athletics Stadium alight on Saturday night give their reactions below.

"I knew I could go faster than my Belgian Championships time last week, but I didn't expect to shave off so many hundredths. They had said beforehand that they were going for a fast time, so I deliberately hung back in the first lap. That left me with a surplus in the end."
"My season was actually already successful when I secured a place in the European Championships. That was the big goal for me. Today's performance is a nice cherry on the cake. Now I'll be working towards my first international senior championship. So, back to finishing another chunk of training. Maybe there will be a 400m in between as a speed boost. Eliott Crestan has always been a great example for me. It would be cool to eventually go faster than him."

"I have run almost the identical time here as last week. That's a sign that I can do it. It was a good race. Based on my ranking, I should be able to qualify for the European Championships in Munich. I will now mainly focus on that competition and consciously not take part in any more races, except for one with the team on the 4x100m. Our handovers were not top notch on Wednesday. If we get that right, our average time will drop, which will put us firmly in the top 16 we need to hit for the European Championships."

"Finally! After running 3'37 several times, I knew it was just a matter of time before that outlier would come. But I had not expected at all that I would improve my record time by so much. This is really unbelievable. The conditions were perfect, I was able to move up well... And I'm now eighth in Europe, even though I'm still only 21. I have been working towards this race for five years.
"The World Championships ranking has made me very restless in recent weeks. I'm following that regularly. Now that I have made the qualification limit for the European Championships, I can calmly work towards the championships. If the pace is not super-fast in the series, I will be able to fight for a place in the final. My last fast lap is definitely an asset in that respect. I really want to prove that I belong there.

"This felt really good. I struggled with a hamstring issue for a bit, which meant I hadn't done a lot of hurdles training. So, I am really pleased with this time. In fact, I would have been happy with anything under 13"50, because I really didn't know what to expect. After all, you always have to get into a certain rhythm when it comes to the hurdles."
"On Monday I will finish a long jump competition in France and the day after that I will leave for the World Championships. I'm mainly going to try to enjoy the competition and do my best. We'll see what it brings at the end of the two-day event. I've been working really hard on the 800m lately, so I'm sure I'll be fine."

"I am standing here with a good feeling. It was a nice race in terms of hurdles, but I played it safe with my pace. Several times, I took too many steps between the hurdles. That normally doesn't happen when I run really fast. I came here to really get that out of my system, but I think I lacked the power of conviction. That will be fine at the World Championships. I have every confidence in that. The most important thing is that I have the feeling that I can run 54" again at the European Championships, they remain the prime goal.