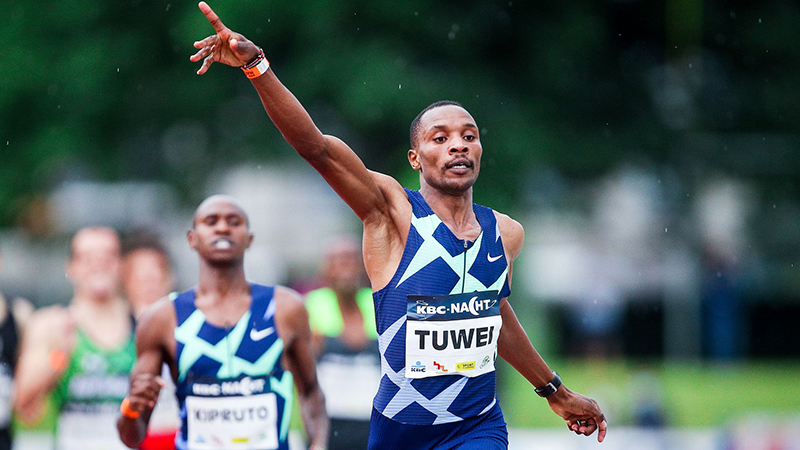 The 42nd edition of the KBC Nacht in Heusden-Zolder was one to remember. In addition to the Belgian records set by Elise Vanderelst and Cynthia, it was a finger-licking evening of athletics. In the end, the moments of heavy downpours did not manage to be a spoilsport.

The 42nd KBC Nacht will go down in history as an absolute top edition. In the Men's 800m, Cornelius Tuwei ran an extraordinary race in 1'43.76, good for the third fastest double track lap in 2021. Aurèle Vandeputte followed in the Kenyan's wake in 1'45.65, which elevates him to fifth place in the all-time Belgian ranking. Pieter Sisk, U23, also performed with a solid PR in 1'46.81. Among the women, Germany's Christina Hering set the tone. Hering was by far the best with a time of 1'59.95.

But there was spectacle in the 1500m too. Kenyan Abel Kipsang fought a dogged battle with Australia's Matthew Ramsden. After a fierce sprint, Kipsang got the long straw in 3'33.96. Jochem Vermeulen managed a tidy PR in the duo's slipstream. His time of 3'35.21 pushes the athlete to fifth place in the all-time ranking. Rani Rosius had to acknowledge the superiority of American Kiara Parker in the 100m. Parker raced to 11.22. The runner from Limburg finished well getting second place in front of a home crowd in 11.44. In the Men's race, our neighbour from the north Churandy Martina treated himself to a beautiful birthday gift. He clocked off in 10.37 on his 37th birthday.

Men's pole vaulting was a last minute addition to the programme. Dutch record holder Menno Vloon grabbed the opportunity to leap over 5m75. Ben Broeders, the best Belgian of all time, had to make do with 5m65. The high hurdles were pummelled by the rain. American Payton Chadwick stayed ahead of Nadine Visser and Anne Zagré. Chadwick clocked off after 12.93. In the Men's 110m hurdles, Michael Obasuyi showed the victory sign. The break due to heavy rain before that race made a fast time impossible. Despite an error on the penultimate hurdle, the stopwatch was stopped after 13.82.

In the low hurdles, all eyes were on Paulien Couckuyt, who has been sharing the 400m hurdles BR with Ann Mercken since the beginning of June. Couckuyt has been struggling with her back over the last couple of weeks, which meant she did not perform very well. The European U23 Champion came third. Victory went to Zurian Hechavarria just like Wednesday in Liège. The Cuban only just stayed above her PR in 55.33. In the closing 5,000m, Ethiopian Gemechu Dida was lord and master. Despite the torrential rain, he got a PR of 13'14.39.