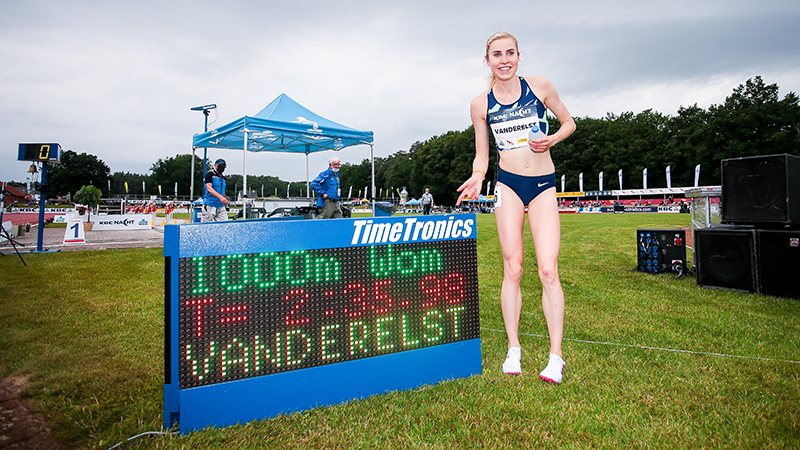 It was anticipated that one Belgian record would get broken at the 42nd edition of the KBC Nacht in Heusden-Zolder. In the end, two BRs were bettered during a mad evening of athletics with the hoped for record set by Elise Vanderelst and Cynthia Bolingo improving the BR for the track lap.

Every whim of fans of athletics was fulfilled at the 42nd KBC Nacht in Athletics Stadium De Veen in Heusden-Zolder. Elise Vanderelst smashed the 42-year-old Belgian record in the 1000m with a solid improvement. The European Indoor 1500m Champion stopped the clock at 2'35.98 and dropped a tiny second below the record set by Anne-Marie Van Nuffel, who was one of the first to congratulate Vanderelst on her record. It is the third national record in 2021 for the athlete, since she has already chalked up the 1500m indoor and outdoor BRs to her name.

Vanderelst was joined by some strong international competition in her record race. Kenyan Mary Moraa proved that her Kenyan 800m title was not a fluke by racing to the best world performance this year in 2'34.71. 'I am so happy for Elise. Somewhere deep down, I worried that I was going to take this record with me to my grave, because many have broken their teeth on it. Today was the ideal competition for her and thanks to her final shot and perseverance in the 1500m, I could see that it was going to end well. She truly deserves this and it is an exceptionally good confidence boost in the lead-up to Tokyo. I will definitely be cheering her on from my seat, but first I am going to raise a glass to toast her record', says former record holder Van Nuffel.

During the 400m race, the women were treated to a heavy downpour. It did not stop Cynthia Bolingo from shooting out of the starting blocks like a woman possessed. The rain did not seem to bother Bolingo and she entered the last straight in the lead. The Belgian record holder could not believe her eyes when the stopwatch jumped to 50"72. After all, it meant that Bolingo had bettered her own BR by three hundredths of a second. 'I wasn't even focusing on the record. I just wanted to finish my own race as best as possible and when I saw the bad weather, I immediately gave up any thoughts of the stopwatch. This makes me very pleased. I had not competed in a 400-metre event for a while and did not really know whether I still had the rhythm in me, but it turns out that I clearly do. This is great for morale. I have been asked a couple of times already whether I might be peaking too early, but it is beginning to look more and more like that's not the case. There is still just under one month to go before Tokyo and a lot can still go wrong, but I am enjoying the shape I am in right now. I will be running one last race in Nancy on Monday and after that I just have to top up my training and rest', says the overjoyed athlete who was also awarded the Paul Eerdekens Trophy for best Belgian performer of the evening thanks to her 50.72.