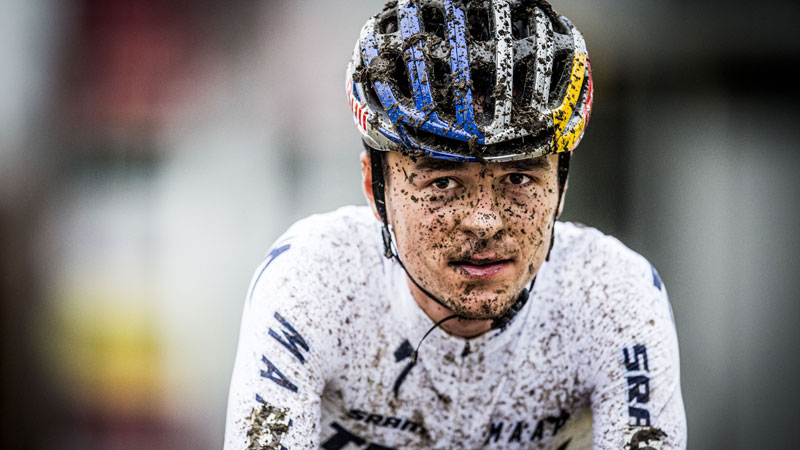 Tom Pidcock has already been crowned best rider at the UCI Cyclo-Cross World Cup in Namur. In 2016, the Brit won in the Junior category and in 2017 and 2018 he proved himself untouchable in the Under-23s. Last season, Pidcock made his debut in the Elite finishing in fourth place. This year, the 21-year-old all-rounder is being tipped by many as the man to beat come Sunday.

The fact that Pidcock is being branded as the main candidate-winner at the Citadel de Namur has everything to do with his brilliant performance last week in the Telenet Superprestige in Gavere. The Brit gave everybody there the slip, including Mathieu van der Poel. "I surprised myself with my performance', said Pidcock after his victory in Gavere. "I will be at my peak at the cross in Namur so I should be even better this weekend. It has been a lovely surprise to be able to progress so rapidly since the start of my season. It is looking good for the coming weeks."

Pidcock will seek confirmation in the UCI Cyclo-Cross World Cup Namur. "I have enough confidence now to say that I am going all-out for victory, even though Mathieu will also be very motivated. Mud, climbs and twists and turns, the Namur course will fit me like a glove. Hopefully, I can continue my performance of last weekend", states the ambitious multi-talented Brit.

Multi-talented? Yes indeed! Pidcock can flaunt world titles in cyclo-cross in the Junior and U23 categories and is the silver medal winner for the Elite of the previous World Championships in Dübendorf. But despite his tender age, he has also garnered an impressive honours list for road bicycle racing including a world title Juniors Road World Championships time trial, victory in Paris-Roubaix in the U23 and three stage wins and the final victory in the Giro d'Italia for Under-23s, the so-called Baby Giro, three months ago.

"My victory in the Baby Giro does not have a direct impact on cyclo-cross, but I did train very hard for that competition and I did become lighter. That is an extra benefit now that I can take advantage of in cyclo-cross", says Pidcock, whose main goal this season is the World Championships, which will take place in Ostend in January. "I am definitely in with a chance, even though Mathieu tends to turn all that sand in Ostend into one giant playground. In any event, he will appear at the start as the favourite and Wout (van Aert) will also be a very strong contender. It is my goal to battle it out with them this year!"

And Pidcock will get his first opportunity to do exactly that this Sunday at the Citadel de Namur. Pidcock, van der Poel and van Aert will line up together at the start of a cyclo-cross race for the first time this season. In addition to this tough trio, all other big names will also feature at the UCI Cyclo-Cross World Cup Namur: Eli Iserbyt, Michael Vanthourenhout, Toon Aerts, Laurens Sweeck, Lars van der Haar, Corné van Kessel,...